The Japan Foundation, Manila (JFM), in partnership with JT International (Philippines), Film Development Council of the Philippines, Embassy of Japan in the Philippines and SM Cinema, successfully concluded the first online Japanese Film Festival, dubbed as JFF PLUS: ONLINE FESTIVAL, on November 20-29, 2020, which kicked off with special screenings at SM Drive-in Cinema at the Mall of Asia held on November 19-22, 2020.

The JFF Plus in the Philippines showcased 28 short and full-length films in various genres, including classic, documentary, animation, comedy, musical, fantasy, mystery and thriller, for free. The festival also marked the launch of the Conversation with Directors series featuring 5 renowned Japanese filmmakers.

Holding film screenings both online and onsite at a drive-in cinema were our best possible efforts to bring the much-awaited Japanese film festival to the Filipino audiences and to provide opportunities to enjoy Japanese movies on screen, amid the global pandemic and the community quarantine restrictions in the Philippines. We were happy and fulfilled to be able to implement JFF PLUS despite the challenges, as it was the first experience for us to mount the film festival outside conventional movie theaters.

The Japanese Film Festival, which was previously known in the Philippines as “EIGASAI” and rebranded as “JFF” in 2020, is an annual event traditionally held in July and August to celebrate the Philippines-Japan Friendship Month. We started our usual planning and preparation as early as January, by meeting our venue partners and sponsors, and contacting film distributors for potential films to be screened at the theater. Then the unprecedented COVID-19 hit the Philippines and the world, which pushed us to come up with a new, feasible plan. We initially tried to explore the possibility of going online in July  to retain our long tradition of holding the film festival in Friendship month, but this plan turned out to be too ambitious; our concerns were the short time frame and the security of online video platform with Japanese film distributors to prevent piracy and illegal streaming.

Subsequently, the JF headquarters decided to develop an online Japanese film festival in 20 countries between November and March. The Philippines, together with Malaysia and Thailand, were thus set to kick off the first-ever JFF Plus in November. Here in the Philippines, the JFF Plus was highlighted with special film screenings at the drive-in cinema which offered a unique cinematic experience adapted to health security protocols. It was just good timing that SM Cinema, one of our long-time festival partners, launched its drive-in cinema at the Mall of Asia and has been operating with the full understanding of the necessary procedures. 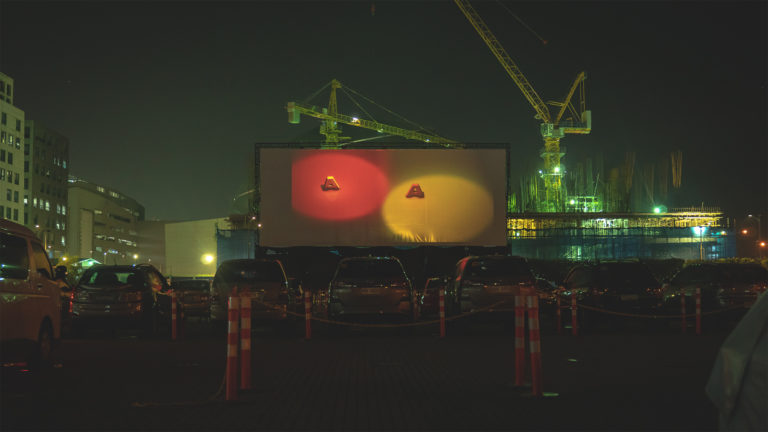 Thanks to SM Cinema that kindly provided its support, our film festival became the first festival in the Philippines that held film screenings at physical space amid the pandemic, although it was very limited as it only run for 4 days and showed one film, Project Dreams: How to build the Mazinger Z’s Hanger. The film is a comedy-drama inspired by a real project of the Fantasy Marketing Department of a Japanese construction company Maeda Corporation that works on construction plans and quotations to build the hanger of Mazinger Z appearing in fantasy worlds of animations, by using state-of-art technology and materials available today in the real world. Absurd it may sound, they amazingly succeeded in making the impossible possible by working together with passion and this was the message that we would like to convey to cheer up in this time of difficulties.

During the Opening Night at the drive-in cinema screenings, we welcomed visitors with complimentary packed Takoyaki, popcorn and hotdog sandwiches, while distributing a face mask with the JFF logo, in order for them to enjoy the usual festive atmosphere of a film festival opening. It was an unusual experience to watch a movie on a big screen, while staying inside a car with audio sounds coming from FM radio. Even though the fact that there was an unexpected technical problems and slight delays, we were happy to hear, and personally witness, that our audiences enjoyed the movie as well as the drive-in cinema experience.

When the JF launched the newly-created JFF Plus website, Filipino audiences reacted enthusiastically. This was well reflected on the numbers of page views and unique users from the Philippines who already created an account and reserved their favorite movies. Our media friends also favorably wrote about and promoted the festival after our virtual press conference attended by more media than we had in previous years.

JFF Plus was able to reach out to many film goers and Japanese movie enthusiasts across the Philippines, especially to areas where we were not able to hold the film festival in the past years. To our surprise, the festival was enjoyed by lots of first-timers who have never experienced it before, compromising a large percentage of viewers. However, we also became keenly aware of how it is difficult to bring in  audiences from a physical site to an online space. We had to review and reconsider our marketing strategy, with trial and error, to find out the effective means to attract and create greater visibility for more Filipinos, especially in the regions.

We also learned how various conditions and limitations would affect an online event, particularly an internet environment and infrastructure of a country, which significantly differs from one another. The streaming platform of the JFF Plus has high-security features to protect the films from piracy, as demanded by Japanese film distributors, and limits OS and browsers as well as gadgets that viewers can use. In the Philippines, it seemed that significant numbers of prospective viewers were affected by these technical and security limitations. We apologize to those affected, and the Japan Foundation will work hard to improve problems that our viewers encountered in the future.

We hope that the coronavirus pandemic will be managed soon and we can organize the next year’s Japanese Film Festival both online and at movie theaters. Hopefully we can bring JFF  to various cities and regions again, so that the wider Filipino audiences can enjoy the festival and get a glimpse of Japanese artistry, culture and society through movies.