Drastic the COVID-19 quarantine came. Overnight, it changed the landscape of daily and national life. Social distancing became the operative experienciation of everyday work and leisure. Everything and everyone were contained in their homes, working and living through the quarantine, except for the chosen one per household who do the essentials outside.

Gender and sexual roles we reified as men with quarantine passes retained breadwinner roles, were allowed access to the outside world doing essentials, while women stretched the household budget and remained the homemakers. Class lines were strengthened, with low-income families locked in their communities with barricades and the public transport ban while the middle and upper classes-maintained mobility through their private vehicles and household staff support.

The government declaration of an enhanced community quarantine lockdowned people in their proper places and times. The poor waited it out for the ayuda or dole outs from local officials, composed mostly of a few kilos of rice, canned goods and instant noodles which also happens to be the standard relief goods for disaster operations. The president, using flexible time of national broadcast, did periodic lockdown reports that provided very little comfort for the people, foraying to the usual tirades and old rants.

We slept through the announcement of the lockdown, and woke up, at least in Metro Manila and elsewhere, to a new normal: a lengthened curfew and liquor ban imposed, military checkpoints emplaced, movement severely restricted, limited supply of food and basic amenities, everyone wore facemasks and distanced themselves one-and-a-half meters from each other, the poor waiting and lining for the ayuda, the middle class stuffing themselves with Netflix and social media use, and the rich worrying about the business downtime. Online was the new order of sociality, of seeing and linking with the outside world, of getting more information about the pandemic, of protesting or defending the violent fates of the pasaway or those that do not follow the lockdown rules.

For most part, writers and artists produce works not ATM (at the moment) as this new normal is still being internalized, interrogated, negotiated, humanized and empathized. There are very few literary works produced in the traumatic moment. Rizal’s novels and martial law literature and films are some that come to mind. There were no novels and local films produced during the time of the Japanese occupation, during the Philippine-American war, or the global financial crises in 1998 and 2008.

As a writer, I am still in media res or in the midst of things. The new normal is in yet I have not yet fully grasped this new normal. In fact, it could be my way of not accepting the new normal. As an activist, too, I question the new normal like other metanarratives — religion, capitalism, liberal democracy, patronage politics, fascism and corruption as part of Philippine governance — and authorities. After all, there is no masterplan — other than to impose and maintain — in the quarantine experience.

We are told it is for the common good, that “we are all in this together” utopia. And of course, there is truth to this. But with the government’s lack of mass testing and tracing programs for the COVID-19 pandemic, what has been emplaced is a seriality of prolonging rather than ending the lockdown, like buying time to find a recourse or a solution to the pandemic. The quarantine is a medical recourse to manage and defeat the pandemic yet what has been emplaced is a military solution heightened by various overly authoritative interpretations and implementations by each local government, down to the police and barangay forces, with cases of intense human rights violations for simple violations of the rules, or for being a pasaway being periodically reported.

It is a baffling situation that I have not accepted and likely will not accept as also constitutive of the new normal. How can the new normal that is out there to manage and defeat the pandemic putting the same people in a greater peril of hunger, losing jobs and hope, uncertainty of the future? And so, like most writers, I pass away the time, doing very little and very little writing.

I have shared what little I wrote in new Facebook groups formed to provide a shared platform for artists and writers’ creative response at this time of COVID-19. I also helped administer some of these groups like Tugon (Response) for artists and writers, and Latag (Setup) for photographers and videomakers. I talk about these things and other related COVID-19 new normal in online videoconferencing fora to share inputs and question the uncertainty that was setup as the new normal. Work from home also means Zoom meetings, and more Messenger calls.

The notions of days and time have also been displaced, with weekends and evenings becoming on-call periods for work and forum activities. Shopping for essentials have also come by way of chat groups sharing resources and networks for procuring food and other supplies, or shopping through grocery delivery social media platforms. I water the plants daily not just because it takes up two hours out of my waking time but also because of the simple joys of discovering the continuance of life in the growth of plants.

As the subdivision where I live has intensely implemented the quarantine rules, I am only allowed to run and walk in the street outside of my home, a good 150-meter distance. The focus of daily life in the new normal is the mundane and everyday things, no frills, covering the basics. Yet there is precarity in the mundane and everyday because the new normal is transmitted through these.

No great writing for now, just taking it slow with the fragility of life and the mind struggling and moving on a daily basis that becomes a soaking period to bask and question the new normal. I will write about these things in retrospect and in the future. For now, it is just the simple writing to match the simple things allowed in the home under massive political and social restrictions. I will not accept the new normal in the quarantine and thereafter as a gestation and rehearsal period when the writing and questioning will come to flow albeit still painfully in the future. 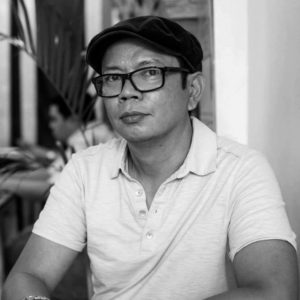 Rolando B. Tolentino is faculty of University of the Philippines Film Institute and former dean of the UP College of Mass Communication. He is Director of the UP Institute of Creative Writing where he also serves as fellow. He has taught at the Osaka University, National University of Singapore, and University of California, Berkeley. His research interests include Philippine literature, popular culture, cinema and media, interfacing national and transnational issues. He writes and has published books on fiction and creative non-fiction. He is a member of the Manunuri ng Pelikulang Pilipino (Filipino Film Critics Group), Altermidya (People’s Alternative Media Network), and Congress of Teachers and Educators for Nationalism and Democracy (CONTEND-UP).

Rolando B. Tolentino is faculty of University of the Philippines Film Institute and former dean of the UP College of Mass Communication. He is Director of the UP Institute of Creative Writing where he also serves as fellow. He has taught at the Osaka University, National University of Singapore, and University of California, Berkeley. His research interests include Philippine literature, popular culture, cinema and media, interfacing national and transnational issues. He writes and has published books on fiction and creative non-fiction. He is a member of the Manunuri ng Pelikulang Pilipino (Filipino Film Critics Group), Altermidya (People’s Alternative Media Network), and Congress of Teachers and Educators for Nationalism and Democracy (CONTEND-UP).
© 2021 Suki Magazine
Terms and Conditions
Copyright
Privacy Policy
The Japan Foundation (Headquarters)